As most of you are already aware, we moved into our new building on Adelbert-Haas-Straßeat the end of last year. We talked about it in our Schleifblog (grinding blog).

But what most of you may not yet know is that we introduced synchronized assembly line production in our assembly hall during the large-scale move. Thomas Plocher, our Head of Production, and his team managed this impressive feat in just nine months. That’s more than enough reason for an interview:

Schleifblog: Mr. Plocher, after decades of manufacturing grinding machines at Haas Schleifmaschinen using the traditional method of fixed-station assembly, the company began manufacturing Multigrind® grinding machines in a synchronized assembly line a couple weeks ago. What led to this significant move?
Thomas Plocher: Shortly after I became Head of Production at Haas Schleifmaschinen in spring 2011, my colleagues and I began planning our new building here on Adelbert-Haas-Straße. When it came to making concrete plans about the new production facility, we came up with the idea of switching to a synchronized assembly line pretty quickly. We then got together with the technical departments to carry out extensive research, and of course visited our mechanical engineering colleagues, who are already successfully “synchronizing,” to obtain information.

Schleifblog: And what happened next?
Thomas Plocher: After the decision was made in favor of synchronized assembly in early summer 2011, we launched an intensive planning phase with all the departments involved, including sales, construction, and quality assurance – without of course interrupting the grueling everyday activities of a medium-sized machine manufacturer. The great thing about it was that my colleagues began coming up with new ideas and suggestions right from the start. We assessed each and every one of them and, whenever practical and feasible, integrated them into our planning. In fall 2012, we then worked with Vollmer & Scheffzyk, an external consulting company, to carry out the informative, exciting TOM simulation game here at Haas Schleifmaschinen.

Haas Schleifmaschinen: The first machine base on it's way to assembly station no. 1.

Schleifblog: You may need to explain that to us.
Thomas Plocher: TOM stands for “Taktorientierter Maschinenbau” (synchronized machine construction). Broadly speaking, the aim was to illustrate to all of us, as clearly as possible, the mode of function and benefits of a synchronized assembly line. This highly realistic simulation game showed us what’s required to ensure that such a large-scale project can be carried out successfully. What we wanted to avoid at all costs was a large project that eventually fails because it’s either not entirely understood or the staff doesn’t really stand behind it. A medium-sized company simply can’t afford a failed project. And I don’t say this lightly.

Schleifblog: What does Haas Schleifmaschinen hope to gain from this step and how will the customers benefit?
Thomas Plocher: We have always focused our efforts on achieving better planning with shorter machining times and a significant increase in quality throughout the entire production process – and these are the benefits of synchronized assembly. Our customers benefit from an even higher product quality and, more importantly, shorter delivery times. We’re becoming more focused and faster in production, without having to compromise on quality. In terms of delivery times, it’s no secret that our customers haven’t exactly been pampered in the past, to put it mildly.

Schleifblog: The move to the new production facility at the end of 2013 marked the start of synchronized assembly at Haas Schleifmaschinen. Excluding the initial research phase, how long did it take you and your colleagues to introduce synchronized assembly?
Thomas Plocher: It’s said that the people of Swabia and particularly the Black Forest tend to be somewhat stubborn when it comes to introducing new processes. They say, “But we’ve always done it that way.” However, that’s not even remotely true. We introduced synchronized assembly at Haas in just nine months, nearly a record-breaking period of time. That’s just not possible if everyone’s not working together and at full capacity. On December 5, we officially placed the first machine base on the rail at assembly station 1 – four weeks after the company move and in the middle of the year-end hustle and bustle: you can imagine what it’s like at a medium-sized machine manufacturing company. That’s why I’d like to take this opportunity to say thank you to all of my colleagues for their dedication and efforts, and for maintaining their sense of humor through all of the stress.

Schleifblog: Can you provide us with an interim assessment?
Thomas Plocher: Anyone who knows Swabians also knows we’re not big on exaggerated enthusiasm, especially when it comes to praise. We tend to say “silence is the highest form of praise.” We’ve been “synchronizing” for a good two months now and are therefore still in the trial phase, which we estimated to be at least three to four months long. We have a total of nine assembly stations with a defined quality check after each one, and it would be a miracle if everything was running perfectly and according to plan after such a short time. There’s still rattling and clattering – sometimes more, sometimes less. But, to be honest, that’s exactly what we expected. After all, we had to carry out the synchronized assembly project with a very limited number of production staff. When you take that into consideration, we really have achieved a great deal so far.

Schleifblog: Are the effects visible yet?
Thomas Plocher: The workplaces at the individual assembly stations and the corresponding processes are clearly structured, meaning they’re tidier. As a result, the montage sequence is less likely to break down. We’re confident that this will have a positive effect on the machining times (and thus delivery times), as well as the quality of our grinding machines.Our aim is to organize the material and information flow in production at Haas in a more targeted manner and thus make it more transparent. With more than 2,000 individual components used to create our Multigrind® grinding machines, that poses a challenge for our planning and procurement logistics. Each part needs to be available to the installer at the right assembly station and at the right time. But overall, I’d say things are running pretty smoothly (another Swabian compliment), and at the end of the year we’ll be able to make our first proper assessment.

Schleifblog: One last question: What was the biggest challenge for you associated with the synchronized assembly project?
Thomas Plocher: The biggest challenge was and still is motivating the employees to relinquish the old ways of doing things and embrace an entirely new process. And that of course not only applies to the functions I’m responsible for – namely materials management, in-house production and assembly – but also all the upstream processes such as sales and, in particular, construction. That’s because a constant flow has to be maintained there too, in line with the assembly timing.

Schleifblog: Thank you for this interview! 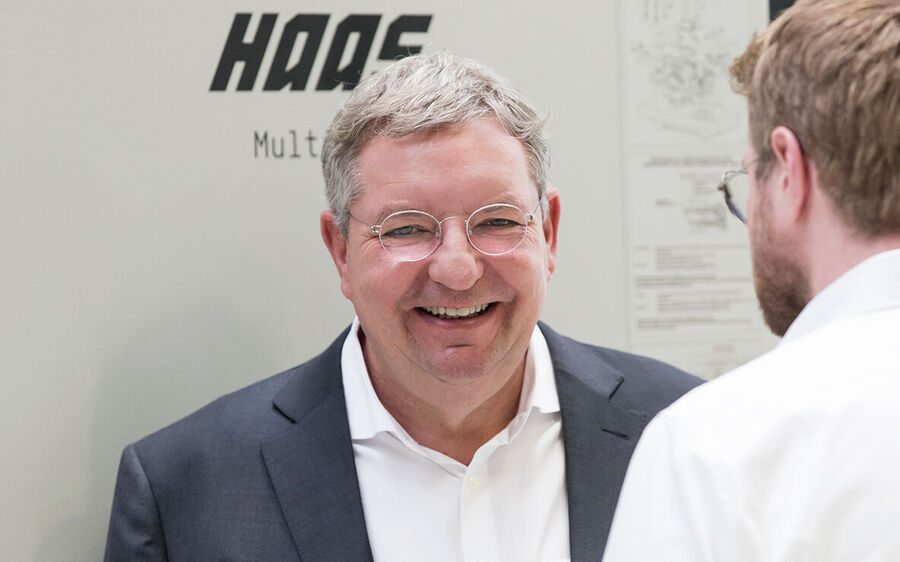 With Multigrind® Horizon, we reconceptualized grinding software from the ground up. The result is software that thinks along with you instead of telling you what you can do and makes our high-tech…

Our booth and team at the 17th China International Machine Show.

Ready to meet any requirement in machining

Our specialists are here for you.